The north west of Tasmania is largely overshadowed by the National Parks and towns in the rest of the state, but this region is just so beautiful, it should never be forgotten. Home to unspoiled scenery and hidden treasures waiting to be uncovered, the north west is a truly magnificent part of Tasmania. Featuring a magnificent coastline that is met with a lush, green hinterland, this region boasts the most unique species of Tasmanian wildlife and is home to some of the most coziest towns you may ever find. With so much on offer, the region is fast becoming a hot spot for tourists, so if you want to get in before everyone else discovers it, make sure you get in soon.

The most visitable town in the north west is the small fishing town of Stanley. With a population of just 450, it is small but it it completely worthwhile. Stanley rests on the tip of the peninsula jutting out into the waters of the Bass Strait, and sits at the base of a large volcanic plug called ‘The Nut’. This is the most notable landmark of the town and is essentially what gives Stanley its distinctive character. Standing tall at 150 metres, the Nut offers spectacular views of the town and rugged coastline and the walk up there is suitable for most fitness levels. What makes the “Nut’ more accessible is chairlift to the top which is especially handy for the old or the unfit! As it is a State Reserve it won’t be uncommon for you to come across a wide variety of birdlife, including shearwaters and orange-bellied parrots, and at the base, some colonies of cute fairy penguins. Fur seals also frequent the waters off the Nut as well, so be sure to bring your camera.

To further your experience of Stanley’s natural beauty, take a short drive to the upper reaches of the Tarkine Wilderness Area. This stunning area is home to Australia’s largest tract of temperate rainforest and many intriguing landscapes and geological features can be found here. The region is also rich in Aboriginal culture, with at least 244 known Aboriginal sites in the area. It is also a haven for threatened animal species, so keep your eyes peeled for rare quolls, bandicoots and eagles.

The town of Stanley itself is a delightfully picturesque one, and from the moment you enter it, you fill feel at ease with the locals and right at home. The town is largely historic and this will become evident as you wander the streets. In the wharf there are a number of old buildings that will pique the interest of historians or the just plain curious. The childhood home of Joseph Lyons (the Australian Prime Minister for much of the 1930’s) can be found in Alexander Terrace and in Marine Park you will find the former Van Diemen’s Land Store. But for the true historical experience of Stanley, pay a visit to the Discovery Centre Folk Museum, where a huge collection of artefacts relating to Stanley’s past are exhibited. This will take you on a journey of the past and really open your eyes to Stanley’s golden days.

Highfield Historic Site is one of the most visited attractions in Stanley. It is nestled high on a hillside with views of farmlands and the town in the distance. The site was actually once the home of the head of the Van Diemens Land Company. Today it has been restored to portray a uniquedepiction of what a stately home and farm in the 1830’s would have been like. Home to convict barracks, a barn, stables and even a chapel, the house truly depicts the days of times gone by. The house itself is built in an elegant Italianate design and although you have to pay a small fee to view the inside, if it well worth it.

If you are on a driving holiday and wish to discover a little more of the countryside, take the forty kilometre journey out to Dip Falls, which is located on the Dip River on Mawbanna Road. The base of these magnificently imposing waterfalls are reached by a series of steep stairs leading from the car park, which is basically at the top of the falls. Bask in the sun and enjoy a picnic as you listen to the sound of the crashing water in the background. When you have finished your exploration here, take a short drive on to the Big Tree, a 400 year old tree that will take your breath away with its size. You can get up close to it via a wooden platform that wraps around the base of its trunk.

Stanley can easily be reached via a 127 kilometre drive from Devonport or a 231 kilometre one from Launceston. The gorgeous scenery of the northern coast will simply amaze you on this trip, so expect it to be an intriguing and captivating one. Above all, be prepared for a relaxing break as this is the ideal place to escape the crowds and the hustle and bustle of the city, all while enjoying the quiet serenity of the north west of Tasmania. 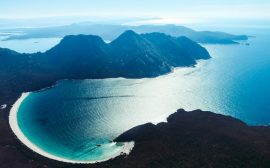 Freycinet and The East Coast 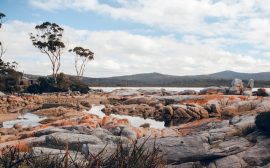 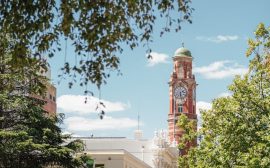 Launceston And The North East